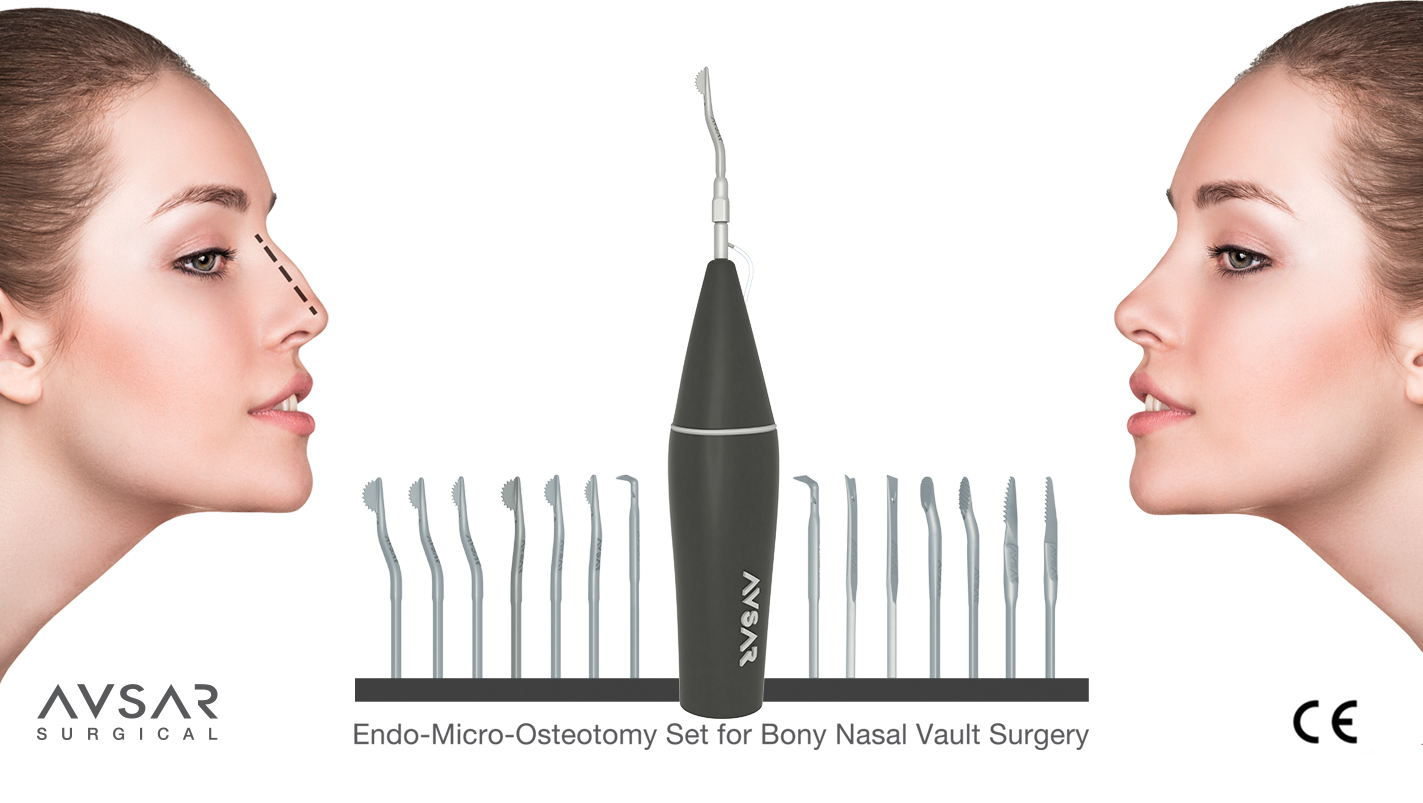 Micro-rhinoplasty is an advanced technique based on the application of endo-micro-instrumentation facilities, both in rhinoplasty and septo-rhinoplasty.

There are three principal facilities in this technique:
1- magnification power of video-endoscopy
2- micro-osteotomy facility of RhinoSculpture set for bone surgery from AVSAR surgical
3- micro-surgical instruments for soft tissue surgery


Micro-rhinoplasty was established by Yakup Avsar M.D. in 2006 and it is now more than 10 years old.

Magnification power of video-endoscopy is predominantly used for reshaping the bony nasal vault. Its use for glabella surgery and the treatment of high-oriented septal deviations is inevitable. Besides this, it is also used for the treatment of septal spurs, repair of mucosal tears and bleeding control during rhinoplasty and septo-rhinoplasty.

Micro-osteotomy facility for bony vault reshaping under video-endoscopy is a technological break-through developed by AVSAR surgical, aimed at effective application of micro-cutting and micro-rasping tools to reform the bony structure of the nose.

These tools designed by Dr. Avsar are used under video-endoscopy. Hump reduction-rasping, medial osteotomy, Aufricht triangle modification, transverse and lateral osteotomies are performed with the aid of RhinoSculpture osteotomy set.
Split-thickness osteotomy is a surgical method in which an incomplete cut is made on the lateral nasal walls keeping the stability of the bony nasal vault. This method was first introduced by Dr. Avsar and is a subsequent advantage of this technology.
Eventually, controlled operation on the nasal structure increases the rate of successful results. Technologies, techniques and tactics used in micro-rhinoplasty enables the surgeon to have high quality control during the aesthetic surgery of the nose. 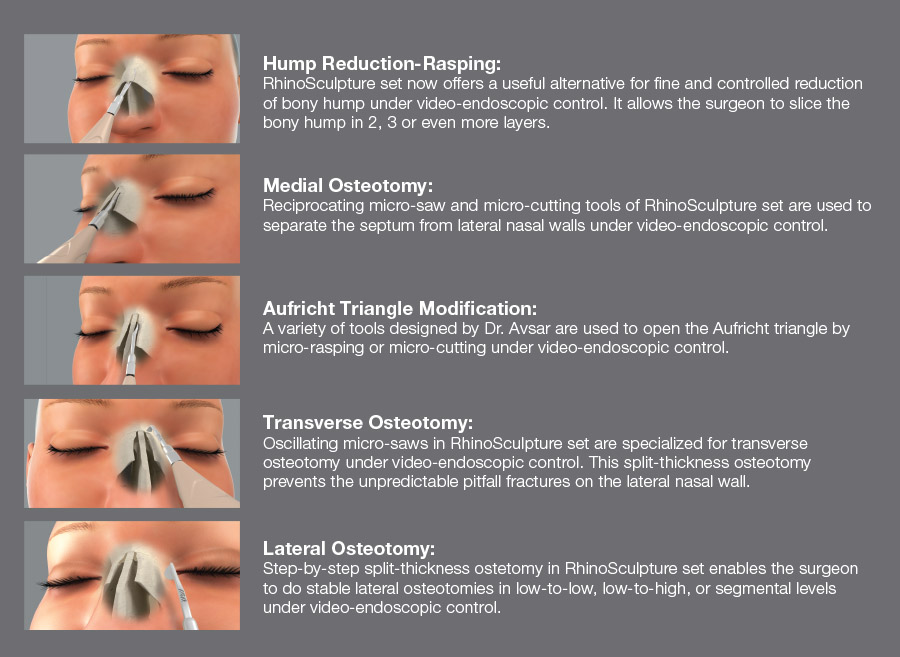 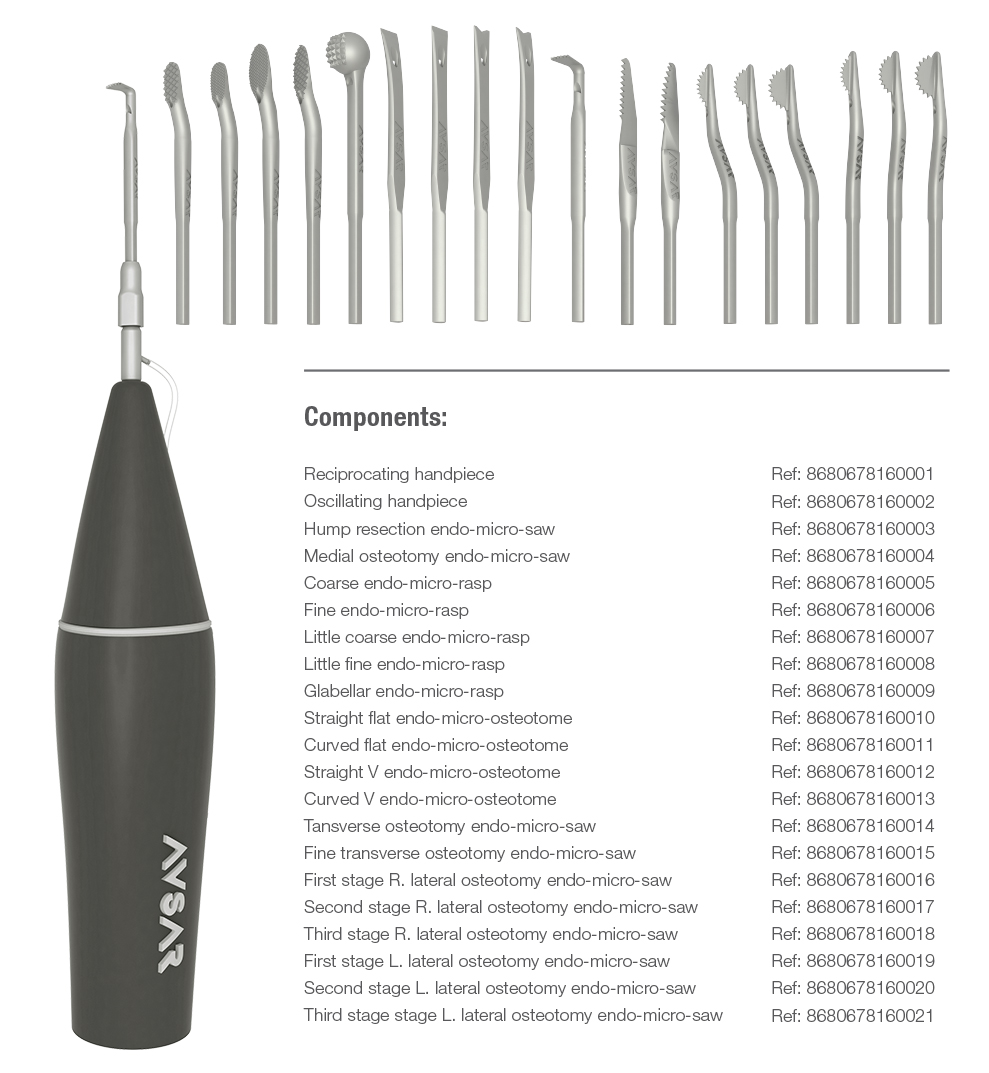